Monday Night At The Fair 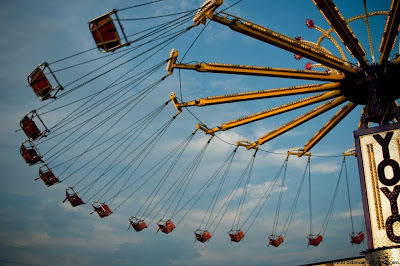 Got a rare opportunity to go out with Kim Monday night as we had no kids. When we were discussing what we should do, she announced "I wanna go see KISS at the fair!" I had to look at her to make sure she was serious. She wasn't sure if she was or not. I am always excited about doing something unusual, so I started the feasibility study. There were tickets available, but when you factored in Fair admission and extras, the costs got prohibitive quick. In my mind, I was already starting to taste Fair food. Kim had already dismissed the idea, since the Fair itself offered no appeal to her. "You haven't thought this through", I told her. "There are all kinds of craft exhibits!"
I convinced her to go and inside, my mouth started watering for the Fair food again. 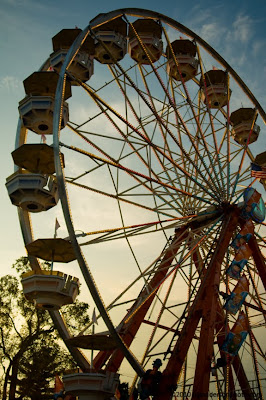 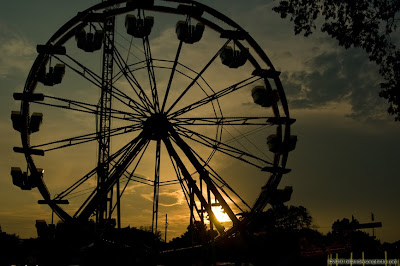 After we got there, we were thinking about food right away (at least I was). we saw the deep-fried Twinkies and I had to try them. We split one and it was delicious! I mean, why not - Twinkie good, fried batter good, what's not to like? I couldn't see any reason to try deep-fried butter or deep-fried Pepsi, so for that I have no report.

After 'dinner' we hit nearly every exhibit hall and barn available and my feet were killing me. Even though we weren't going to see the concert, we didn't want to leave before it started. We thought maybe we could get a glimpse of the action from the side as we were heading out to our car. Well, a few other people had the same idea, but someone had figured out how to open a gate, that got us a lot closer! If you click on the picture below, you will notice Mr. Simmons um...singing on the jumbo screen on the lower right. 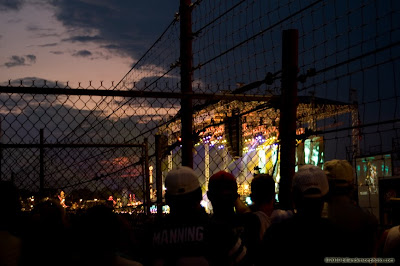 So we got to do the fair and see KISS after all. By the way, I have never been a fan and the show is pretty much what I expected, but it is a sideshow and what would the Fair be without one.
Posted by Bill Anderson at 12:47 PM